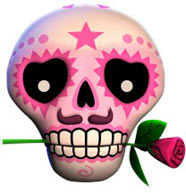 Esqueleto Explosivo is a 3 reel 3D slot from Swedish Supplier Thunderkick games. One of the most original, entertaining and fun games around, it features an exploding skeleton Mariachi band (seriously!) with 5 reels and 17 paylines.

Actually, it doesn't have reels as such - each of the five skeletal band members has three skulls stacked on its body and the skulls fall off every time you spin, being replaced from above by a whole new set. If the skulls fall into a payline formation, they start to sing, then explode! Bizarre, but great fun.

It doesn't have a feature round, extra spins or even a jackpot, but it's easily one of our favourite slots to play.

Unusually, you can't select how many lines to play, or even alter the coin size. Instead, you choose an overall bet, from 0.10 per spin all the way up to 100.

There are five type of skull in the game, each one coloured differently and each one having a different payout (from 0.70 for 5 cyan skulls to 2.50 for 5 pinks) Each skull type also has its own unique song that it sings before exploding! The game includes a Dropping Symbol / Collapsing Stack feature that continues as long as you're winning - the skulls keep falling, singing and exploding. It's really enjoyable to watch, but even better when you consider each explosion is increasing your win! 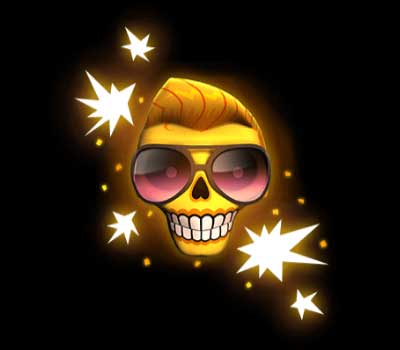 The game also features the Mucho multiplier which increases one level for each Symbol Drop and / or Esplosivo Wild appearance, doubling all the way up to 32x. Total wins are multiplied by the Mucho to give you a decent payout potential.

The small, frequent wins mean that Esqueleto Explosivo can correctly be categorized as a Low variance slot. Theoretical Return To Player is a decent 96%.

As discussed above, this is not a run of the mill slot, but something quite different. Although some 'standard' features may be missing, it offers so much more in terms of originality and sheer enjoyment that it's a game you'll find yourself playing over and over!

The video below shows how the Explosivo wild symbol can disrupt the stacks, causing them to collapse and rack up big wins very quickly!

Where to play Esqueleto Explosivo slot